I had a plan: undertake a big project in my apartment every other year. It would take forever, but that timeline would allow me to pay off one project and save up for the next. First it was replacing the carpeting and the heating and air conditioning system (year 1), then replacing the kitchen appliances (year 3), then repainting the living room and bedroom (year 5) and then replacing the windows (year 7). The full bathroom was set to be next in year 9 (2013), but there were other things that needed to be done – replacing my laptop and some furniture. So the full bathroom renovation was set for 2015, with the floors scheduled for 2017, the kitchen in 2019, the half bath and new doors (and maybe the walk-in closet) in 2021. Just as we were ready to begin tearing out bathroom tile, my mother announced her plan to move in with me.

My plans rapidly changed: both bathrooms and the floors were set to be finished by  early 2016. With the successful renovations completed, it seems only reasonable that the kitchen renovation and replacement of the doors also would move forward, but 2017 was a bit earlier than expected. We decided to forge ahead because a) my contractor had time in his schedule (a nearly unheard of situation) and b) I was concerned that waiting would be unduly challenging for Mom.

Mom’s transition to Baltimore was smooth in that we sorted out the big things fairly quickly – we got her settled in the apartment and figured out health care and so on. On the surface, it all looked good. But, the smaller things were more challenging … the effort to remember which drawer held her socks, how to turn on the television and so on tested her capacity everyday. Since everything was new, it was likely that she would forget at least some of these basic things on a regular basis. This sense of not knowing the essentials was like a drip – drip – drip, wearing her down. It’s not an overstatement to say that this is a daily struggle for her.

Some days, Mom rallies and succeeds; other days … not so much. In some ways, she is stronger than when she came down – physically, certainly; emotionally, yes – but in other ways she is declining. So, given the disruption of routine that comes with renovation, I wanted to move forward while she was able to cope with the inevitable change, so we embarked upon a kitchen renovation well before the originally planned date.

Kitchen items moved all over the place. Since my bedroom was still fairly packed with things that I needed to sort out (from previous renovations and Mom’s move down), only some of the kitchen items could come into my room. The rest of the kitchen items were effectively in “Mom’s space”. She did pretty well, all things considered. We used paper plate and plastic cups and sometimes had food delivered. Fortunately, it was summertime, so running to the deli for sliced turkey and potato salad was not only practical but made it possible to avoid cooking altogether. We made do.

Mom had fun helping to pick out the kitchen finishes, though she deferred to me. It was very sweet – she said that she had picked out the kitchen she wanted in her house and now it was my turn to have what I wanted.

The cabinets are blue-grey, the counters are white quartz, the cabinet hardware is a mix of chrome handles and glass knobs in the shape of a rose. The back splash is white tile with a combination of marble, porcelain and iridescent shell. The wood floors extend from the living room into the kitchen. The large dish cabinet has a whitewash finish that matches nicely. I wanted something a little different and I’m pleased with the outcome. 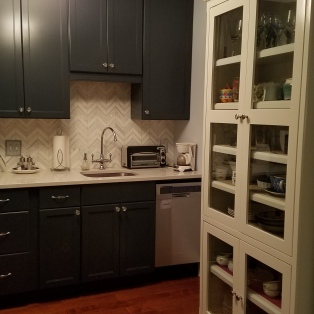 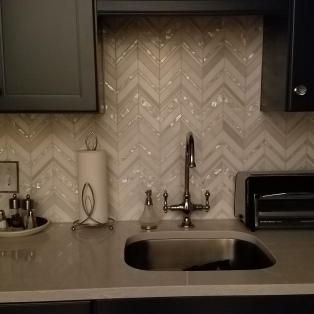 The kitchen renovation was completed months ago and all the kitchen stuff has been stored in its proper place. The new doors were installed as well – closet, bathroom and my bedroom doors were all updated by October 2017. Mom adapted just fine. Even though it was a greater financial burden than I wanted just now, I’m glad we didn’t wait – the timing was just right. She loves the new kitchen and the doors, and is able to enjoy them. She has a shelf in the corner cabinet for coffee, peanut butter and her other essentials.

She still has days when she can’t find the sock drawer, though.

(Somewhat) Daily News from the World of Literary Nonfiction